The first bespoke model unique to CUPRA and a new beginning for CUPRA as a standalone brand.

Initially available with a 300BHP, 2.0 litre turbo petrol engine combined with Four Wheel Drive and DSG gearbox, it will be followed by a further range of engine and gearbox choices.

Formentor is available to order now. 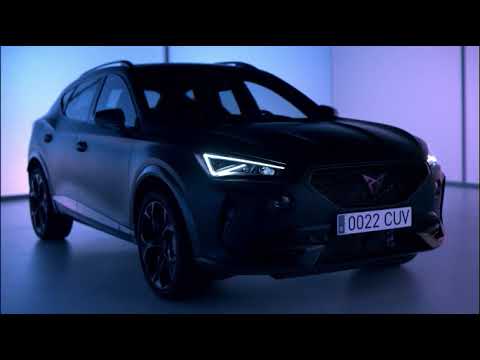 CUPRA is starting production of the new Formentor. The first vehicle uniquely designed for the brand is ready to hit the market next week in its 310PS version and will feature a wide range of up to seven engines, including plug-in hybrid versions from next year.

The CUPRA Formentor becomes the sixth model to be produced in Martorell and will represent more than 10% additional production volume for the plant. The next SEAT President and CUPRA CEO, Wayne Griffiths, wanted to send out a message of confidence and informed that the plant is already operating at full capacity for the production of this car and the company’s other models.

From Martorell to the world

In total, manufacturing the first exclusive CUPRA model requires the participation of 3,000 workers on line 2 of the plant, divided into three shifts. Initial production of the Formentor will kick off with 160 units per day.

“The new Formentor is a big step for CUPRA. As its first uniquely developed car, it will make the brand grow, be more visible and more desirable. We aim to exceed our initial goal of doubling CUPRA’s sales volume with the launch of this car and break into new international markets thanks to its wide range of seven engines. Moreover, this car will also represent more than 10% additional production volume for the Martorell factory and will make its production line to work at full capacity. I am convinced that this model will change the future of the CUPRA brand.” highlighted Wayne Griffiths.

A pillar for CUPRA...

The Formentor is a key pillar in CUPRA’s globalisation strategy. With this new model, the brand plans to consolidate itself in the major European markets and enter the most electrified countries, such as Norway. CUPRA will also expand its intercontinental footprint across new Latin-American markets, as well as Turkey and Israel, as Griffiths stated.

The first model to be homologated under the CUPRA brand joins the CUPRA Ateca and the CUPRA Leon, whose new versions are also entering the market in the last quarter of 2020. The brand thus begins its product offensive after selling 55,000 units since its creation in 2018 until the end of September, exceeding all initial expectations.

In addition, CUPRA will begin its journey towards electrification with the arrival of the first plug-in hybrid variants of the CUPRA Leon, before the end of the year, and the CUPRA Formentor, in early 2021. These will be joined by the CUPRA el-Born, the first all-electric model, which will also be launched on the market next year. The brand expects to reach one billion euros of SEAT’s total turnover when its entire range is available.

After inaugurating the first CUPRA Garage in Europe in the city of Hamburg, Griffiths also announced that for the launch of the Formentor the brand is creating a dedicated CUPRA network with new and flexible formats that go beyond the traditional dealer. The brand is expanding its network to reach close to 520 CUPRA Specialists across the world by the end of the year, and it’s in the process of recruiting more CUPRA Masters to reach a total number of 600 worldwide by the end of 2020.

​Streamlined and sculpturally sophisticated, the matching spoiler is built for ideal airflow

​​Sound you can feel

The Formentor comes in a range of different colours. Including Magnetic Tech Grey Matte and Petrol Blue Matte

Wrapped in ambient light. Select a hue that fits your mood.​

Get driving directions via the immersive 12” touchscreen with connected mapping services.​

Front and centre. The 10.2” Digital Cockpit displays all the detail you need.​

Enter your registration and mileage to get a free valuation. Release the value of your vehicle.
Paint Protection
Vehicle Replacement Insurance

Back to Top
Back
Vehicle Valuation
Compare Saved Vehicles
Top
Close
Your Cookie Settings
Select your cookie settings
Strictly Necessary Strictly Necessary cookies are essential to let you move around the website and use its features, such as accessing secure areas, shopping baskets and online billing. These cookies allow our website to provide services at your request.
Functional Functionality cookies are used to remember the choices you make, e.g. your user name, log in details and language preferences. They also remember any customisations you make to the website to give you enhanced, more personal features.
Targeting Targeting cookies collect information about your browsing habits to deliver adverts which are more relevant to you and your interests. They also measure the effectiveness of advertising campaigns.
Save Settings
Cancel Changes