What will happen to my old ZOE battery?

No matter what, performance decreases over time, though by predictable amounts. It is currently estimated that the battery of an electric car will maintain about 75% of its starting energy capacity after a period of use of 8 to 10 years.

At that point, a manufacturer like Renault considers that the performance level is no longer sufficiently high for use in a car, but this loss of performance does not mean that it is already time for the recycling stage. Before closing the loop, the circular economy would require a search for other, less demanding uses, for which the loss of capacity is not an immediate disqualification.

The topic has even been taken up by the European Commission. In 2018, it signed an agreement on innovation with several European manufacturers, Groupe Renault being among them, aimed precisely at promoting the reuse of lithium-ion batteries before they are recycled. 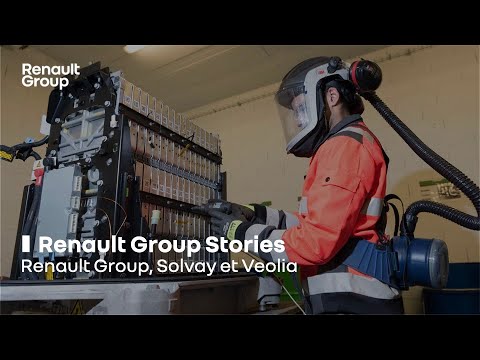 Optimising the life cycle of electric car batteries is a crucial issue for the development of this sector. Groupe Renault optimises the use of the battery over the course of its entire life cycle, from its assembly and service on board a new vehicle all the way until it is recycled.

Furthermore, incorporating lithium-ion batteries into a circular economy plan also contributes to making electric vehicles more affordable for consumers. The value of the batteries increases, allowing the cost passed on to the purchaser of an electric car to be lowered.

Reuse before you recycle...

Among the different possible uses for batteries, stationary energy storage is undoubtedly the most compelling of second life scenarios. Whether at the scale of a house, a building, an industrial site or a neighbourhood, a battery’s capacity to store electricity makes it easier to integrate electricity generated by renewable and intermittent energy sources like wind or solar power into the grid. Groupe Renault has already launched several experiments that are demonstrating the benefits of this approach in a concrete way.

On an island like Porto Santo, stationary storage capabilities provided by second-life batteries from electric cars have already reduced dependency on fossil fuels while promoting the use of renewable energy. On Belle-Île-en-Mer, reusing lithium-ion batteries from Renault ZOEs has, for example, made it possible to store the energy produced during the day by solar panels installed on the roof of the local school for use during the night. As a result, the building is able to enjoy carbon-free electricity whenever it needs it, not only at the moment it is produced. As for the lithium-ion batteries themselves, their life cycle is extended by at least 5 extra years.

This way of thinking can also scale up. For example, Renault has launched a project called Advanced Battery Storage, which aims to build the largest stationary energy battery storage system ever conceived, and to do so using electric vehicle batteries, by 2020 in Europe.

With such plans in place, the circular economy of electric vehicle batteries is making it possible to simultaneously promote the use of renewable energy and to speed up the transition to smart energy grids! Groupe Renault is also working on these crucial issues hand in hand with many specialised start-ups. For example, it supplies second-life batteries to Powervault, a British company that specialises in energy storage units for private residences equipped with solar panels.

Electric vehicle batteries only reach the recycling stage after several years of extra use thanks to this second life. At the end of their journey, the challenge is to then handle used batteries in such a way as to allow for the rapid reuse of the resources they contain, either within the automotive sector or an adjacent industry. That’s the idea behind short-loop recycling, one of the driving forces of the circular economy!

Although every effort has been made to ensure that the information contained on this page is as accurate and up to date as possible, Renault U.K. and SMC Motor Group reserves the right to modify its models without notice, including their characteristics, specifications,equipment and accessories.

Brochures inevitably become out of date or inaccurate in some respects, in that such characteristics,specifications equipment, or accessories may be changed after the publication date given below and can differ from the descriptions given or the photos displayed. It is therefore necessary to check with your Renault Dealer before purchasing any product that the characteristics, specifications, equipment or accessories of the vehicle on order are as advertised.

To read the full article from Renault.com/ please click the link CLICK HERE. Please be aware that by doing this you will be connected to a web site that is beyond the control of SMC Motor Group and they can not be held responsible for actions or problems that may arise from doing so.​

Enter your registration and mileage to get a free valuation. Release the value of your vehicle.
Paint Protection
Vehicle Replacement Insurance
Back to Top
Back
Vehicle Valuation
Compare Saved Vehicles
Top
Close