A car built to arouse your driving instincts with wings extended by up to 60 mm, and special bumpers featuring a F1® style front blade at the front and a wide diffuser at the rear 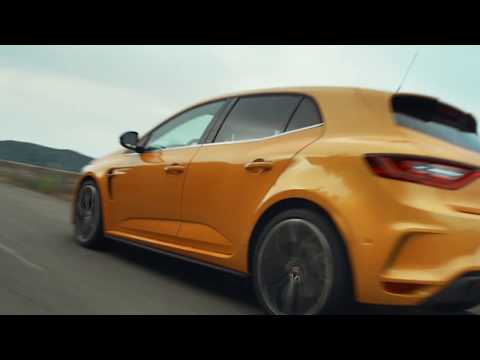 All-New Mégane R.S. provides two chassis combining efficiency, agility, stability and comfort, and offers customers with the option of either a Sport or Cup chassis. The Sport chassis is suggested for those drivers who like a sporty, but still refined, drive. As an alternative, the Cup chassis receives revised springs, dampers, anti-roll bars and bump stops – it is 10 per cent stiffer than the Cup chassis. Its front and rear hydraulic compression stops provide a high level of chassis efficiency and its new Torsen mechanical limited slip differential provides different lock-up values under acceleration and deceleration for enhanced traction and higher cornering speeds.

Available as an option with the Cup chassis are Brembo®’s bi-material brakes. These bi-material aluminium/cast iron discs help reduce the weight per wheel by 1.8kg. Previously acclaimed on Mégane III R.S., the Brembo ® braking system has been improved, offering drivers greater power, endurance and therefore confidence behind the wheel. The diameter of the front brake discs has been increased to 355mm (+15mm compared with the previous generation). These are handed to each side of the car to maximise cooling during intensive use. The brake pedal setting focuses on the accuracy of the pressure applied, enabling drivers to remain in complete control, especially on the racetrack.

In a world-first, the All-New Mégane R.S. has shock absorbers with hydraulic bump stops all round, as standard. Effectively integrating a shock absorber within the shock absorber, as the end of travel approaches, a secondary piston dampens the movement of the wheel before the bump stop. By dissipating the energy without transferring it to the wheel – as a traditional bump stop would – the compression hydraulic stops help avoid any rebound and pendulum effects, enabling optimum control of tyre-ground contact and providing the feeling of having eight dampers on the car.

Debuted on Mégane II R.S. in 2004 – ahead of all rival systems – the PerfoHub independent steering-axis front suspension epitomises Renault Sport's expertise in chassis and suspension systems. Initially designed for use in motorsport, PerfoHub has adapted well to powerful front-wheel drive cars, especially when they are also fitted with a limited slip differential.

The All-New Mégane R.S. gains the option of a six-speed EDC automatic transmission for the very first time alongside the widely-acclaimed six-speed manual. The EDC automatic received a number of updates from Renault Sport engineers – the transmission was strengthened to withstand the torque and revs of the Mégane R.S.’s 1.8-litre engine and given new gear ratios and specific shift patterns. These shift patterns are associated with the Mégane’s Multi-Sense modes:

The EDC transmission also receives Multi-Change Down and Launch Control. Multi-Change Down drops several gears under braking by pressing and holding the left paddle. The best gear is then selected to exit the corner as efficiently as possible. Launch Control is available in Sport and Race modes when the clutch and turbo are preloaded, enabling an optimum standing start. When in Sport mode, Traction Control provides the driver with additional support.

A brand new 1.8-litre engine has been developed for the All-New Mégane R.S. with 280hp – the most powerful 1.8-litre engine available on the UK market today. The engine received a completely new cylinder head, reinforced structure and more efficient cooling. Another focus was the twin-scroll turbocharger – used on the previous Mégane R.S. – to improve torque at lower revs. The engine also benefitted from surface treatments usually seen on engines from motor racing and super cars, such as a Diamond-Like Carbon (DLC) coating for the valve lifters and Mirror Bore Coating for the cylinder sleeves. All of these elements resulted in a 390Nm peak torque from 2,400-4,800rpm.

The R.S. Vision full LED lighting system – a world-first when shown on Clio R.S. in 2016 – combines four lights into one housing shaped into the Renault Sport chequered flag motif. This housing contains side lights, fog lights, cornering lights and high beam and enables high performance at night – the lights have a 17 per cent higher range than on previous Mégane R.S.

R.S. Monitor has been taken from the previous Mégane R.S. and completely revised to be made more user-friendly in All-New Mégane R.S. The R.S. Monitor gathers and summarises information for approximately 40 sensors around the car. This displays real-time sensors via R-Link2 on acceleration, braking, wheel angle, 4Control, temperature, lap times and speed.

Building on R.S. Monitor, R.S. Monitor Expert provides all of this but it also allows drivers to film their sessions via smartphone and overlay telemetry data to create augmented reality videos. Data can also be uploaded to the Renault Sport website to analyse with other users.

The various modes are accessed via the R-LINK 2 touchscreen tablet. The R.S. Drive button provides a shortcut to the Sport (short press) and Race (press and hold) modes.

The All-New Mégane R.S. provides a very high-specification of equipment – for both high performance and passenger comfort – as standard. Inside, the driver and passengers will instantly recognise they’re sat in a Renault Sport thanks to the chrome-plated R.S. door sills, custom R.S. roof lining and sports seats with Dark Carbon R.S. upholstery. The driver also receives a little extra luxury with a Nappa perforated leather steering wheel and gear gaiter.

On the outside, the All-New Mégane R.S. is wide and muscular – setting it apart from the Mégane – thanks to its custom front bumper with Gun Metal Grey F1-style blade and honeycomb front grille and rear bumper with functioning diffuser and central exhaust. A rear spoiler increases the sporting stance of the car. Its standout R.S. Vision full LED lighting system in the style of a chequered flag provides a unique-in-segment technology in a distinctive design. All-New Mégane R.S. also receives Gun Metal Grey ‘Estoril’ 18-inch alloy wheels as standard.

Enter your registration and mileage to get a free valuation. Release the value of your vehicle.
Paint Protection
Vehicle Replacement Insurance
Back to Top
Back
Vehicle Valuation
Compare Saved Vehicles
Top
Close
Your Cookie Settings
Select your cookie settings
Strictly Necessary Strictly Necessary cookies are essential to let you move around the website and use its features, such as accessing secure areas, shopping baskets and online billing. These cookies allow our website to provide services at your request.
Performance Performance cookies collect information about how you use our website e.g. which pages you visit most often, and if you experience any error messages. They also allow us to update our website to improve performance and tailor it to your preferences. These cookies do not collect any information that could identify you - all the information collected is anonymous. They will not be used to target adverts to you on other websites.
Functional Functionality cookies are used to remember the choices you make, e.g. your user name, log in details and language preferences. They also remember any customisations you make to the website to give you enhanced, more personal features.
Targeting Targeting cookies collect information about your browsing habits to deliver adverts which are more relevant to you and your interests. They also measure the effectiveness of advertising campaigns.
Save Settings
Cancel Changes