The All-New Dacia Sandero with its robust silhouette and its restyled front end, highlighted its new Y-shaped brand signature with LED lights, the All-New Sandero reveals it's totally revamped design. Having one of the most spacious interiors in its category, with a generous boot and storage space, it adapts to your daily life, making travelling much more enjoyable.

The All-New Sandero continues to give customers greater access than ever before to the best value-for-money cars on the market.

Subtle tweaks to the exterior ensure the All-New Sandero delivers an strong and robust presence. The overall lines are smoother, with a more sloped windscreen, a slightly lower roof and flowing roofline. Ground clearance is unchanged yet the New Sandero gives the impression of sitting lower and more grounded.

The front and rear lights display Dacia’s new Y-shaped LED light signature, providing the All-New Sandero with a strong identity. A horizontal line joins the two lights both at the front and rear and extends into the LED lights, giving the car greater visual presence.

The LED headlights, offered as a standard feature across the entire model range, increase night-time visibility, with a 37% increase in beam length and 9% in beam width.

The All-New Sandero and Stepway are fitted with a new front axle with rectangular suspension arms that provide effective shock absorption and enhanced steering. Anti-roll capacity has been improved and the wheelbase extended for greater cornering stability. The new engine mount has been upgraded to minimise vibrations in the cabin.

Dacia is celebrating success at the What Car? Car of the Year Awards 2022 after the All-New Sandero was judged the ‘Best Small Car for Value’ and the New Duster won the ‘Best Family SUV for Value’. In addition, Dacia was named the second most reliable car brand.

The unbeatable value of the All-New Sandero was officially recognised after the expert What Car? judging panel was won over by the supermini’s unrivalled blend of practicality, specification and attractive pricing.

A first for Sandero an option of of an automatic gearbox!

The new model offers you the options of a new CVT (Continuously Variable Transmission) automatic debuts on the All-New Sandero, delivering smoother gear changes and a more responsive driving experience.

Newly designed front seats provide greater comfort and support with height adjustable headrests and new, more premium upholstery. A wider range of adjustment in the front seat and steering wheel boosts comfort for the driver, while a central armrest available on Prestige versions enhances this further. The gearlever is now shorter, while the power steering offers greater driving comfort – especially in tighter manoeuvres or in car parks – with 36% less effort required than the previous Sandero. Take a look for yourself on the video below.... 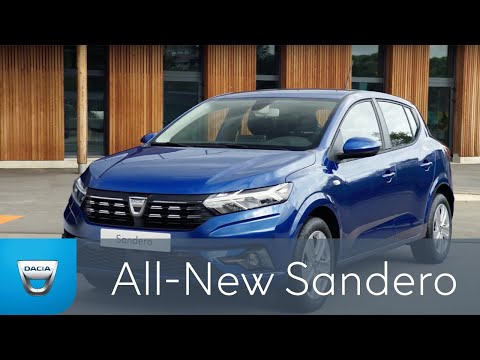 The features available on the All-New Sandero and are in line with what customers want and need in their cars. We listen to our customers and give them the useful features and technology that they’re asking for, without adding unnecessary costs. Standard features across the range include a smartphone holder (removable depending on the version), an on-board computer screen and a steering wheel featuring speed limiter. Automatic headlight activation is available from Essential models and up. ​

The All-New Sandero is one of the first the first Dacia models to be built on the CMF modular platform. Offering superior strength and rigidity, it increases protection in the event of a collision. The structure has been reinforced in the engine bay and the passenger compartment. The new door pressure sensors and accelerometer can detect early side-impact collisions enabling the new curtain and side airbags to inflate rapidly, protecting the stomach, chest and head.

Enter your registration and mileage to get a free valuation. Release the value of your vehicle.
Back to Top
Back
Vehicle Valuation
Compare Saved Vehicles
Top
Close